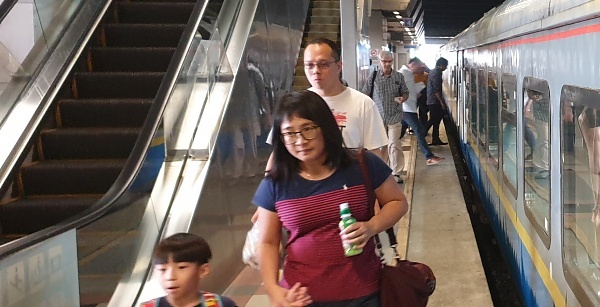 And it's fun too, because some of the older tracks in Malaysia still run through remote patches of jungle and other beautiful scenery, just as they did during the old days.

This makes traveling through Malaysia by train still feel a bit like traveling in colonial times. Sure, the trains have been upgraded since then, but you'll still find it quite easy to imagine what it was like back then.

The main rail service operator in Malaysia is called KTM Berhad, also known as KTM. The KTM Intercity train service covers some of the most popular routes, including Singapore to Kuala Lumpur Sentral.

The full train trip to Kuala Lumpur from Singapore is about 6 hours. Meals are available and, unlike much-maligned airplane food, the dishes offered on this train, mostly local fare, are quite a treat.

The train to Malaysia departs from the Woodlands Train Checkpoint, located in the north of Singapore, just south of the Causeway.

You can make your way here from pretty much anywhere in Singapore by MRT, bus or taxi. By the way, for your information, immigration formalities for both countries, Singapore and Malaysia are done before boarding the train.

All in all, Menaiki Kereta Api from Singapore to Malaysia is a cool experience and quite recommendable. Besides, where else can you find a decent sleeping place combined with A-to-B transport so cheaply? Tip: Take a Deluxe Sleeper, it's awesome!