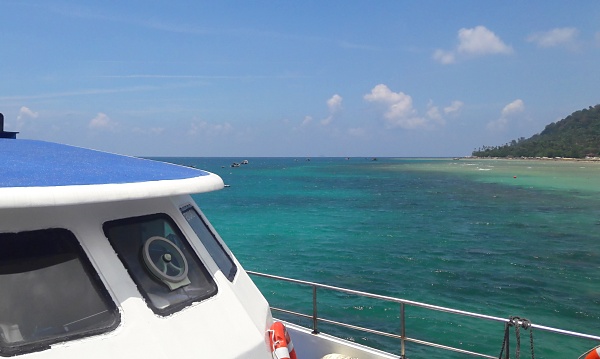 Tioman Island is renown the world over for its idyllic setting and breathtaking scenery. During the past decade in particular, Tioman has seen quite an uptick in its popularity, both amongst travellers from the immediate region and from further afield.

What makes Tioman so unique, apart from its sheer visual beauty of course, is that the island is located quite a distance from the Malaysia mainland, rendering it secluded and giving it an almost private feel. Think Fantasy Island, the 80s hit tv show about the eponymous, somewhat mysterious tropical island.

Yet at the same time, Tioman is quite accessible, given that a long-standing and reputable ferry ride is offered from Mersing, the gateway town located right at the Malaysia east coast. For those with a more generous budget, there's a flight too.

From Singapore to Tioman
Whilst there's a mere 150 kilometers separating Singapore from Tioman, it typically requires a bit of organization to get there. For one, there's a border crossing at Woodlands, which if not timed right, can take up to an hour or more. Then, once through to Malaysia, there's a drive from the immigration complex to Mersing.

The good news is that there's a lot of options here. You can take a bus from Larkin Bus Depot, which is the budget option, albeit somewhat challenging for the Malaysia newbie. For intrepid travellers, it's quite feasible, however. Not to mention cheap, at about MR 20, depending on the bus taken. The bus ride takes about 2-3 hours, again, depending on the bus company/route taken.

Taxi
If you know what you're doing, there's taxis available to Mersing. Just head to City Square Mall. There will be taxis at the taxi stand. The drive takes about 2 hours and costs up to MR250, depending on size of the vehicle and number of passengers, as well as amount luggage. But if you prefer to book a taxi in advance, then click here.

From Kuala Lumpur to Tioman
If your departure point is Kuala Lumpur, then you'll be pleased to know that you can take a bus to Mersing from this city. There are quite a few options, as below booking module shows, including a night-bus, which may leave you red-eyed a little when you reach Mersing, but you'll be able to spend more time in Tioman for it, so a worthy cause in our book.

If you're really keen to get to Tioman in a bit of style and with a fair amount of comfort and convenience, then there are taxis available.

Keep in mind that Malaysia is quite large and the drive can take up to 5 hours. Still, it's a beautiful country too, so there's plenty to see. Tip: Stop and have a few meals along the way; the food is bound to be delicious.

NOTE: Arriving with plenty of spare time for the ferry to Tioman is always recommended. This is always the case, no matter where you travel, but applies even more here, as ferry departure times to Tioman Island are subject to tides, sea state and weather, which makes for a dynamic mix. This results in non-fixed departure times. So the more wiggle room you have, the more things will work out in your favour.

Book your bus to Mersing here:

Ferry Tickets
Ferry tickets to Tioman may be purchased on the spot at Mersing Harbour Centre. However, there is no guarantee that your ferry still has available seats by then of course, in particular given that Mersing's ferry times are susceptible to external factors. In light of this, booking your Tioman ferry tickets in advance, i.e. online, makes good sense. This applies especially during weekends, school holidays, public holidays, as well as during the June to September season.

If you're looking to book the ferry to Tioman, make sure you choose a ticket provider that comes recommended. Some of the ticketing companies provide ferry schedule updates, for instance by Twitter, which are quite useful. After all, ferry times from Mersing have a tendency of being rather dynamic, due to weather and sea state conditions around the area being subject to fairly abrupt changes.

Ferry stops
Before you're on your way to Tioman, make sure you know at which jetty or "kampong" your resort is located and remember the name of your kampong. Kampong means village in Malay and it's these villages that are announced when you reach Tioman's various destinations.

This is the usual order of the stops on your way to Tioman:

1. Kampong Genting
2. Kampong Paya (Don't mistake "Paya" for "Berjaya", which is the next stop)
3. Kampong Tekek (Disembark here if you're going to Berjaya, Tekek or Kampong Juara)
4. Kampong Air Batang (Also announced as "ABC")
x. Panuba Jetty (If and when there are passengers on the ferry that are staying at this resort)
5. Kampong Salang

Simply reverse the order on your way back from Tioman to Mersing. Please ask the crew if you're not sure where to disembark.

By the way, if you're going to Kampong Mukut or Kampong Nipah, please inform the ferry crew in advance, so they know where to go, because these kampongs are generally not on the usual destination list.

Please note that on days when the tide is extremely low, the last ferry back to Mersing may be delayed. Please check the departure times on the displays at the ferry terminal or ask a terminal official the moment you arrive on Tioman.

Here's to a great Tioman trip!

Have an enquiry about the ferry to Tioman? Send it here...