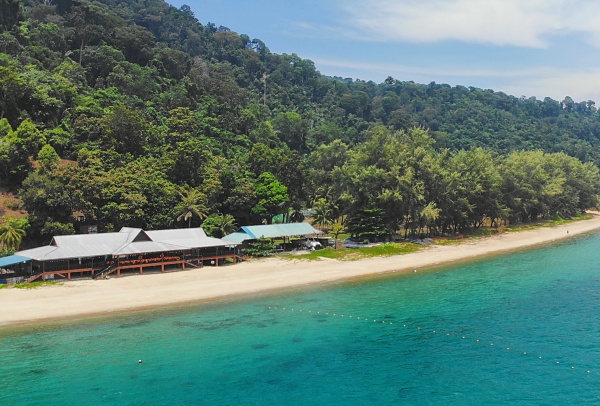 Tekek, in spite of its status as just a village, is actually big enough to be considered the de facto capital of Pulau Tioman. Tekek is located along a 3 kilometer bay at the island's central west-facing coast and is the third stop if you're coming in from Mersing by ferry.

It's also your halfway point if you're bound for Tekek's antipodal village on Tioman's east coast, Juara, because you need to drive cross-country from Tekek by taxi to get there.

Tekek has seen a fair bit of development over the years and currently boasts a full-on arrival complex and altogether decent urban infrastructure, complete with plenty of retail shops, eateries, a school and even a bank of sorts (including ATM). Tekek also has a concrete road and motorised traffic in the form of mopeds and cars, such as the SUVs and 4x4s used to shuttle travelers to and fro.

What's more, Tekek is the owner of Tioman's sole airport, as well as a yachting marina and immigration complex, albeit the latter is not in use currently. Tekek's other draws are its duty-free goods and numerous accommodations catering to various budgets.

And let's not forget the dense verdant jungle that offers Rafflesia flowers, a stunning waterfall and copious wildlife of both the animal and plant variety, as well as the great snorkeling to be had at Tekek's Marine Park and Pulau Renggis, in particular.

Tekek is also the jumping board to Tioman's many scuba diving sites, so if you're keen to scuba dive in Tioman, Tekek is the place to find the better dive outfits.