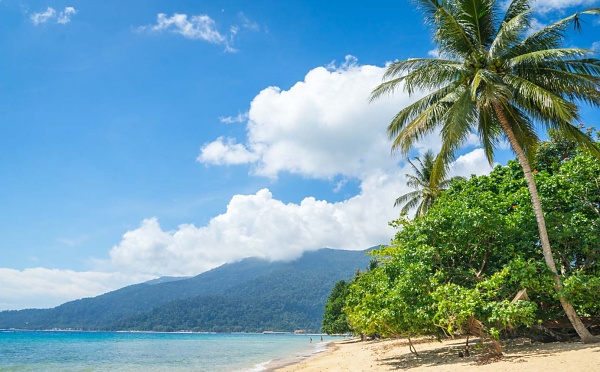 Kampong Nipah is located along the south-west facing coast of Tioman. Nipah is one of a few back-to-basic villages in Tioman. You won't find a lot of activity here, apart from that caused by the wildlife. But if peace and quiet is what you're longing for, Nipah is hard to beat.

Backpackers tend to like Nipah, not only because it's decidedly low-budget, but also because it's off-the-beaten track. The two separate accommodations you'll find here are both a collection of simple wooden shacks. Luxury here is a fan at night and cold running water to shower in.

But the setting in Nipah is nothing short of idyllic: a golden-colored beach, a green lagoon and the unmistakable slope of Gunung Kajang, Tioman's highest peak and a sort of Mystery Mountain for its legends and sheer impenetrable jungle. If you're keen to scale the mountain, Nipah is the place to start your ascent. But hire a local guide, because people have been known to get lost on this mountain in the past.

Note that you can snorkel and scuba dive at Nipah, since there is a scuba outfit located here too. However, to get to Nipah, you'll need to get off the ferry at Genting and then hitch a ride in a water taxi, because Nipah doesn't have a jetty big enough to support the regular Mersing ferry.