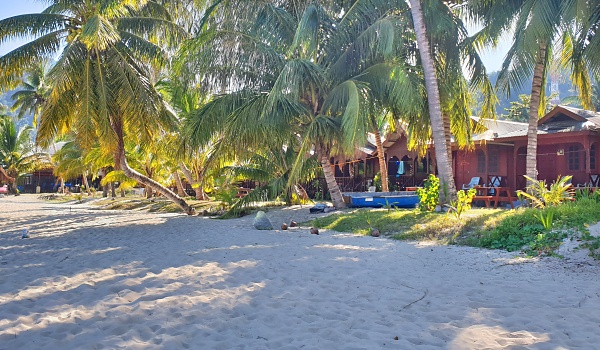 Juara is the only village on Tioman's east coast and arguably the most secluded. The Mersing ferry doesn't go here, which is probably why Juara is still as quiet and rustic as it was before Tioman's discovery by overseas travel agents.

The only way to reach Juara is by private speedboat from Genting or by Jeep from Tekek.

Some hardy travelers trek their way across the island from Tekek, but at nearly 3 hours, it's not for the faint-at-heart.

That said, the simply stunning sunrise alone makes Juara more than worth the effort. And Juara's beach was voted 21st most beautiful beach in the world by CNN, so try not to miss it when you're doing Tioman.

Juara offers a few chalets and restaurants, most of which are sitting within a stone's throw of the sea. In fact, whichever Juara establishment you visit, you pretty much always have a gorgeous view of the sea.

Apart from the sea and the beach, there's a dense emerald jungle to explore, as well as a modest river, a waterfall and a lagoon, so you won't be in need of places to see and things to do, especially since there's also a turtle sanctuary to check out.

By the way, if you're into surfing, visit Juara during the monsoon months, November - February, because the surf here gets up to 10 feet and is rather good quality. As a matter of fact, so surfable are these waves that Juara is now home to an annual surf contest.

Juara Express
As for the Juara Express ferry that's going to be operating its ferry service direct to Juara out of Tanjung Gemuk, the word is that this service may soon start.

The Juara Express ferry would be a great addition to the fleet of Tioman ferries, as so far, none goes direct to Juara, necessitating disembarking at Tekek and then taking a cross-Tioman taxi to Juara.