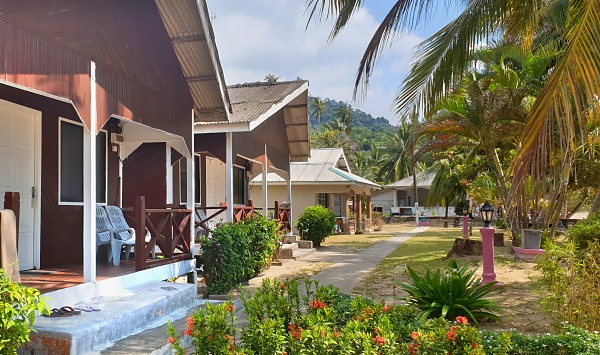 Kampong Genting is considered a relatively large village in Tioman. Genting is situated between Paya and Nipah, straddling about 1.5km of beaches.

Apart from beautiful beaches, Genting also offers a fairly hilly hinterland of lush tropical rainforest, which manifests itself by the incessant and almost hypnotic calls of the countless cicadas and tropical birds. It's a jungle out there :)

A favorite haunt for locals and tourists from further afield, Genting boasts a decent number of budget hotels, chalets and restaurants clustered together along the beachfront.

Generally, expect the weekends to be alive with activity, happy-go-lucky revelers aplenty and karaoke music.

Most of the Genting resorts offer chalet-type accommodation that sprawl along its hilly slopes. The beach, however, is always a mere stone's throw away. The sea here is pretty rocky, but the waters are very clear; the larger semi-submerged boulders lending the seascape a uniquely exotic look.

Genting offers a few shops, restaurants, cafes, chalets, a clinic and a mosque. You can stroll along the main strip (read: concrete footpath) from one end of the village to the other in about 30 minutes.

If that's too much effort to your liking, then simply rent a bicycle for a few Ringgit. Once you venture out, expect to see monitor lizards and cheeky monkeys.