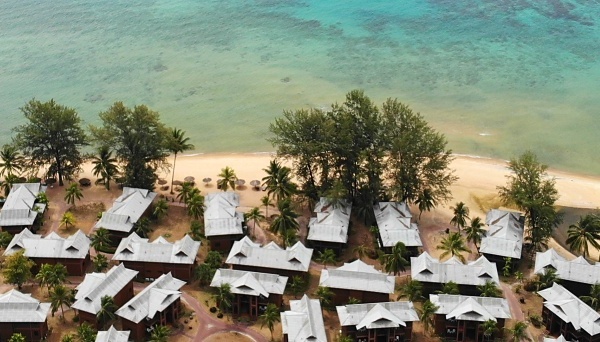 The first thing I should say about Berjaya, in fact, about Tioman Island as a whole, is that it isn't exactly the easiest place to get to. Now, I realize this probably applies to all islands and island resorts but it applies all the more so to Tioman and its resorts, because the only way to cross the sea divide between the mainland and Tioman is by ferry.

Unfortunately, the aerial service to Tioman is a bit on again off again and when we took our trip, it happened to be off again.

I'll mention our ferry ride a little later on, as that warrants its own little section.


But whereas you may expect the somewhat challenging journey to be enough of a drag so as to render Tioman too much trouble, in actual fact it's one of the main reasons why Pulau Tioman, as it’s known locally, is just as awesome today as it was several decades ago when it first started garnering interest from tourists on a global scale.

Tioman is located about 45 kilometers from the Malaysia mainland; not quite crazy far by any stretch, but far enough to create enough technical headaches for both public and private organizations to realize a robust transport system.

Of course we now know that this has turned out be a blessing in disguise, given that it has helped prevent Tioman from becoming as overrun and overdeveloped as Bali for instance. Sure, Tioman has seen an increase of resort numbers over the years, but as an idyllic tropical island destination, it hasn't lost any of its kampongesque castaway island charm.

One of the first to operate a resort in Tioman, Berjaya opened its doors in earnest in the late 80s. Back then, it was considered swanky for its huge size, its exclusivity, its attractive Minang design and of course its high rates.

Let it be said however, that the resort, several rounds of refurbishments notwithstanding, looks rather dated now. It's still pretty and still comfortable, but clearly, certainly in terms of look and feel, service level and freshness, Berjaya has been superseded by a number of other retreats in Tioman.

All of that being said though, we still enjoyed our stay at Berjaya for a number of reasons. To wit, of all the resorts in Tioman, Berjaya is the one with the most amenities and facilities. They have it all: beaches, a gym, tennis courts, a spa, a house reef, great buffets and easy access to lots and lots of recreational activities. Best of all, it's still within easy reach of Kampong Tekek, Tioman's de facto "capital". None of the other more contemporary resorts can compete with this comprehensive package.

The room we stayed in, a cute standalone cottage, was clean and adequately appointed. All the usual suspects were there: coffee/tea corner, en suite bathroom, aircon, hot water and of course the obligatory daily free bottles of mineral water. Special mention to the wifi at Berjaya, as it was top notch; stable and adequately swift.

The queen-size bed was nice, firm, just right. As a matter of fact, you'll find you'll sleep like a log in Tioman, possibly the result of the proximity to both the sea and Tioman's still mostly untouched rainforest. The air in Tioman veritably crackles with positivity.

The other aspect of our Berjaya stay we enjoyed was the F&B. The main restaurant, Nelayan, is spacious and the meals are well prepared, tasty.

I should point out that even though Berjaya has dropped its rates over the years, it's still somewhat overpriced as compared to bang-for-buck at other accommodations on the island. But you won't go wanting at Berjaya, that much is true.

Snorkeling at Renggis was superb, I recommend it. It may well be the best coral garden spot in all of Tioman. And the organized jungle-trekking was just as memorable, courtesy of Berjaya's nature guide, Mr Musa, whose unrelenting enthusiasm rubbed off on all of us in the group.

All in all, whilst perhaps not the most value for money resort in Tioman, if you don't mind spending a wee bit more and as long as your expectations aren't 5 star, Berjaya will have you satisfied on pretty much every front. My only peeve is that it's a little too retro to our taste. But that's just the way it is I suppose.

As promised, a little note about the Mersing to Tioman ferry. Before embarking on this journey, it's good to realize that it's not the sleekest ferry operation around. The cabin of our vessel was a little cramped and the service was a wee bit curt. And also, it was freezing inside. But, let's face it, tickets are cheap, and bottom line: they get you to your destination safely. Besides, it's just a 2 hour hop between Mersing and Tioman.

Will we be back to Tioman? Yes. But we're probably going to try one of the more recent retreat additions, Aman perhaps, or maybe Tunamaya.